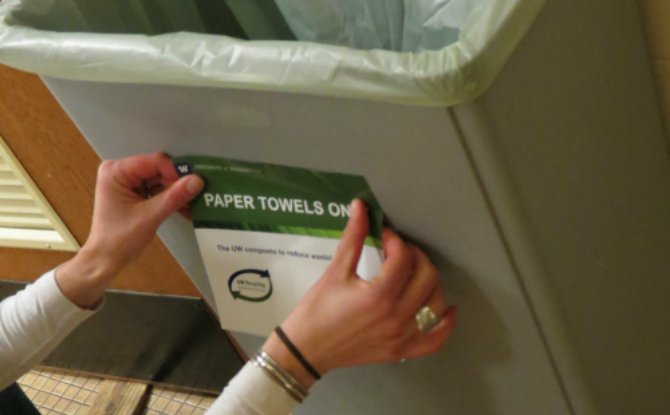 The University of Washington in Seattle has done it again. For the third year, they’ve won the Green Cleaning Award for Schools & Universities Grand Award! What’s so impressive about this school is how they keep pushing themselves to do even better with their green cleaning program. This university is a true role model for the schools across the country.

Blazing a Green Trail
The University of Washington was cleaning green way back before green meant anything more than the color of the campus lawn. In fact, the first green cleaning decision can be traced to as early as 1985, when Gene Woodard, Director of Building Services, joined the team. “When I started, I saw that we were using very harsh, phenolic-based disinfectant that was creating residue on every surface you looked at,” recalls Woodard. “I came from healthcare environment and we didn’t even use a disinfectant that potent. We eliminated that right away. People are our most important resource and we need to protect them. That’s been my philosophy ever since 1985.”

Doing Grand Things
Today the program is doing simply amazing things. In a push to drive sustainability, the Custodial Department merged with the Recycling & Solid Waste Department in what is now called the Building Services Department. The MiniMax Waste Reduction program is an innovative new program that focuses on including building occupants in the process of waste reduction. After achieving a 61 percent waste diversion rate last year, the program is now composting paper towels and providing composting bins throughout campus. They have made a complete switch to microfiber cloths, diverting an estimated 900,000 gallons of water from the sewer system annually. Chemicals are being eliminated as much as possible: The department has made the switch to chemical-free auto scrubbers that convert water into a cleaning solution for floor care and sterilize with dry steam vapor.

“The changes that have been made throughout the history of the program support the pride our people take in their work because they have relationships with the customers they are serving,” says Emily Newcomer, Assistant Director, Recycling and Solid Waste. “In addition, they take pride in using safe, healthy green products that work.” She sees a real community sense in her staff, the students and the faculty.

Changing Quality of Life
There have been changes that are based in green cleaning but reach much further. For example, the department now works on the day shift (with a small team that remains on the swing shift for emergency situations). This switch began as a way to conserve energy and cut power bills for the school but quickly became a morale-boosting life change for employees.

When the switch to the day shift first started, there was a lot of resistance. Many custodians had grown accustomed to working the night shift for 20-plus years, and for some, this was a second job. “But those same people have since personally thanked me,” recalls Woodard. “Their lives have been enriched, their life is more normal, and they can have dinner with their kids. So many of our staff had two jobs so when they came to days, the university became their first job. It meant a different morale and a new outlook for how they perceived their role at the university.”

Is your school interested in being recognized for excellence in green cleaning? Be the first to find out when the 2015 award application is released!